As a way of saying thank you to our subscribers, we have launched Genes Extras. You'll find exclusive competitions and discounts on family history magazines, days out and much more.

Take me to Genes Extras 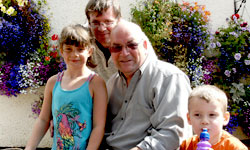 “My parents divorced when I was just 5 years old and I was formally adopted by my new step-father, ending all contact with my biological father.

Thirty seven years later, I received an email via Genes Reunited. It was from my dad and one of my half-sisters! They were searching for me and my brothers and left a contact number. Twenty minutes later I phoned my dad, who was left completely speechless.” 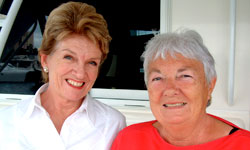 “My mother lost contact with her cousins over 50 years ago and I had tried, without success, to trace them. One day I received an email from another Genes Reunited member asking if we shared the same great-grandfather. More emails were exchanged and we discovered that we were related.

It turns out that not only are we both living in Australia, but in the very same city! And to our complete surprise we both realised that we owned boats that are moored opposite each other. In fact, we had passed each other often in the past year and exchanged pleasantries!

My mother who's approaching her 100th year was absolutely ecstatic that the mystery had been solved and I'm so happy that I've found a cousin and other relatives in the UK. I really believe we're all joined by six degrees of separation!”

“I discovered my granddad’s second cousin was Joe Bambrick, a footballer for Ireland, Chelsea and Walsall. Joe holds the record for the most goals in an international match, 6 against Wales in 1929.

When he scored the 6 goals against Wales a local lemonade factory brought out a commemorative bottle called ‘Joe Six’.” 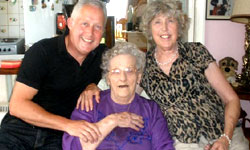 “I was adopted 74 years ago. After many years of feeling less than whole, I decided to do some research into my past. After delving through records on Genes Reunited, I recently found my Aunt, aged 100 and two half-brothers! One of my half-brothers only lives 20 minutes away from my home in Sussex.

To complete surprise, I also struck an incredible coincidence that the house I currently live in, is the very same house that my biological mother lived in 30 years earlier!

With my new found family, in so many ways, my life is just beginning.”

“This year I discovered that my 3x great grandmother, Anne Tennant, was murdered as a witch. I was shocked to find that it was recorded on her death certificate as: ‘Wilful murder, deliberately stabbed to death by James Hayward with a pitchfork under the delusion of witchcraft.’

I looked into the British Newspaper Archive Records on Genes Reunited and found out that James Hayward was her neighbour who believed she was the leader of a group of witches that lived in their village of Long Compton. He claimed she had bewitched him so he couldn’t work in the fields properly.

According to the newspaper article she had gone to the local bakers for bread when James, on his way home from work attacked her with a pitch fork. Anne was murdered September 15th 1875.

Sheila was born in a town called Linlithgow, Scotland, which is also the birthplace of Mary Queen of Scots. In fact Sheila's father was the Town Piper. When an older relative asked Sheila if she was interested in their family history, she jumped at the chance. One of the first things she learnt was that an ancestor, Sir Christopher Wray, was the Lord Chief Justice under Queen Elizabeth 1st and he signed Mary Queen of Scots' death warrant.

Since then, Sheila has gone on to be an integral part of the Genes Reunited community by assisting other members with their research and uncovering her own celebrity relations including the actor Hugh Grant.

With the help of another Genes Reunited member, Kay found her Great Great Grandfather Mons Jeckles. He was deaf and dumb and abandoned at a circus as a young child. Sharm; the other Genes Reunited member; used the address on her Great Grandfather William Walton's wedding certificate (his fathers details missing), the name Lillian Walton as a witness and Sarah as his wife as the information for the Genes Reunited site. They also had the lead that he was known as Mons Jeckles on a circus poster in 1874 that is in her possession along with a gold watch inscribed 'Happy Jackles Circus'.

The 1891 census showed him as having the surname Jackles, living in Burnley, Lancashire and that his occupation was 'Circus Groom'.

Kay also has the grave references for Mon Jeckles who is buried in the Cullen family grave in Burnley.

On Thursday, December 28, 2006, Gabi stepped on to an aeroplane and two days later, in Australia, she was in the arms of her mother. This is only noteworthy because on December 28, 1990, her mother died. Gabi was adopted in 1968 and spent many years fantasizing that she was, in fact, Ringo Starr's secret daughter. Every so often, it occurred to her that it might be an idea to try to trace her natural mother, but never quite managed to do anything for fear of upsetting her adoptive mother. However, after her death from cancer just after Christmas in 1990, Gabi wondered if now might be the time to find out a little more. A decade passed, so she turned to the Genes Reunited site, and found a Lindsey B Jones had created a family tree. "Would you like to send Lindsey a message?" read the screen. Gabi clicked on the 'send a message' prompt and wrote: "This is a shot in the dark. I was born on September 2, 1968, named Cathy Jones. I think you might be my mother." A day passed. Nothing appeared in Gabi's inbox. Another day passed and then, on Friday, October 13 at around about 3pm, there was a reply. It was Lindsey, ecstatic, emotional, just as Gabi had always hoped; overjoyed to be found by the daughter she had handed over so many years ago. Since that incredible moment, they have exchanged emails every single day. By the following week, Gabi had booked a flight to Perth and has gone, in just 21 days, from having nobody except her children and husband, to having 26 great aunts and uncles, many cousins, two new siblings, a stepfather and a mother. "I have been given the chance to be a daughter again, almost to the day that I lost that right." Gabi is now emigrating to Australia.

It started when Lee found his Mum's brother on Genes Reunited. They had never met (and have yet to meet) but thanks to Genes, after 67 years they have found each other and are now in touch. But a strange twist happened in May 2007 when Lee's family booked a holiday to Paris. They squeezed onto a fully booked Eurostar train to Disneyland but had to change at the Lille Europe station in France. With the choice of either end of the busy platform to wait, they chose one end but for some inexplicable reason, changed their minds and waited at the other end. When it was time to board, they used a lift to return to the train but as Lee got in, there was his mum's brother standing there in front of him! He couldn't believe it! As the lift door was shutting he shouted and called to him, at which point his uncle looked up at him with a very puzzled look on his face. Lee's partner and children also wondered who he could possibly know in France!

Lee and his family waited down stairs until his uncle came down and explained to him who they were. He looked just as shocked as they did not believe this one-in-a-million chance had happened.

Victoria has used Genes Reunited to trace her family back to 1680. In total she has over 17,000 names in her tree and has reason to believe that she is related to Lord Tennyson's wife, although this has not yet been confirmed.