Do you have Scottish ancestors?

Perhaps you do and you just didn't know! Search our brand new Scottish census records today and discover if you have Scottish roots.

It's been exactly 350 years since Mr Punch made his debut appearance in England. Mr Punch, who was soon joined by his long-suffering wife Judy, has been entertaining the great British public since May 9th 1662.

To celebrate the anniversary, family history website GenesReunited has searched the records and British Newspaper Archives, accessible on its site, to uncover a series of images from across the ages that capture the significance and lasting appeal of Punch and Judy. A real life Mr Punch and wife Judith have also been discovered in the 1881 Census.

The newspaper clippings show the prominent role that Punch and Judy have played in British culture, and how they have travelled beyond British beaches. Punch and Judy can now be found across Europe, Australia, America, India, Japan and China. However, records from 1949 show how the decline of Punch and Judy began to creep onto the news agenda - but not for its lack of morality and political correctness as would later become the focus, but for the dying trade in the carving of wooden puppets. 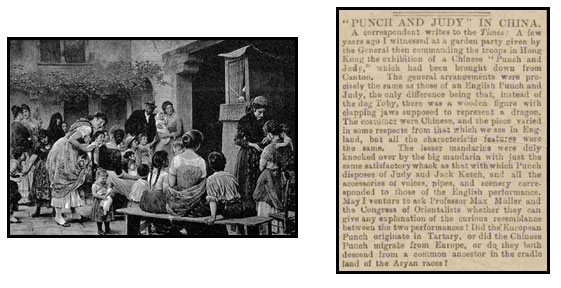 Rhoda Breakell, Head of Genesreunited.co.uk said: " For any character to reach 350 years old is an immense achievement, especially for a husband and wife duo, the only question is how she could have stayed with him for so long?

"Over recent years there have been a number of attempts to change the show, but those are a reflection of changing times and the age that we're living in. Sadly, many children in Britain have never seen a Punch and Judy show which means that they're missing out on something very unique.*

"These historic images show how successful Punch and Judy have been at crossing cultures, such as the article from 1892 that celebrates them arriving in China. We also checked our Census records and found a real Punch and Judy who lived together in Yorkshire in 1881 - who knows what their family life was like?

"Who would have thought that a pair of beachside puppets could bring so much joy to so many people? As Punch himself would say, that's the way to do it!'